Portal was about using physics to your advantage. TesserAct, a puzzle platformer from Phoenix-based Propelled Bird Software, lets you bend it to your will, lead developer Clay Walters said in an interview with Arizona Gamer.

TesserAct was greenlit last month and Walters expects the game to hit Steam this summer. The developers also recently received backing on Indiegogo to pay for licensing fees.

The game is set in a “universe based on scientific theory,” Walters said. It follows Sam, a student who is inexplicably teleported to an abandoned moon base in another dimension.

She stumbles upon the Catalyst, a tool that can manipulate the laws of physics, and sets out to find a way back home. 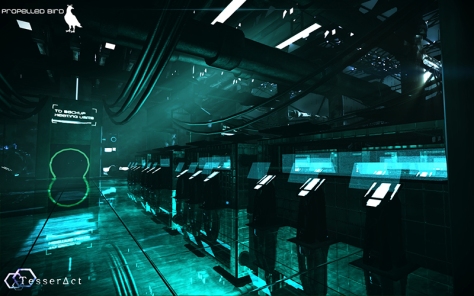 One of the main goals for TesserAct was to make it based in real science, Walters said. The game uses plausible physics, he said, and bases its story around the Multiverse theory. The team even brought in a geophysicist to advise on game mechanics.

“We thought it would be cool if we could make a realistic approach to this,” Walters said.

The Catalyst is the game’s main tool. In-universe, it’s used as an emergency implement, Walters said, similar to the “jaws of life.” Its uses include manipulating gravity, decreasing friction to run faster and making stairs out of waterfalls.

“We wanted to have story play a big part in the game,” he said.

Part of the remaining work to be done on the game is in level design, Walters said, but the puzzle designing itself is less difficult than finding how that puzzle would play in the story.

“That’s the hardest part that we have,” he said. “Not necessarily coming up with the puzzle but fitting that puzzle back into our aesthetics and theme.”

The puzzle designing process usually involves Walters and the rest of the team “playing around” in Unreal Engine 3 until an idea strikes them. 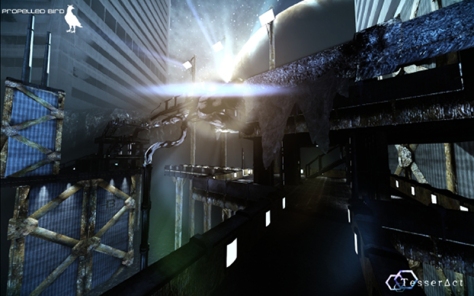 The idea for TesserAct came in Walters’ and his friends’ sophomore year in high school. It began as a project to build a portfolio but turned into something more as the public’s interest in the game increased.

“It’s already bigger than we thought it would be,” he said. “We’re just hoping people will like it enough to remember us.”

The team had hoped to raise money through Kickstarter, but they were unable to meet their funding goal, Walters said. They took to Indiegogo next, where they managed to raise enough to pay for software licensing fees.

“It’s all about what kind of ability to get publicity you have,” he said. “We’re a smaller team and this is our first project. When you have not a lot of people who know about your game, Indiegogo works better.”

TesserAct will likely be priced in the $20-25 range, Walters said. The team plans on developing other downloadable content after release using ideas that didn’t make it into the initial release, he said.

There are even talks of making a sequel to the game if it does well.

“We had talked about six or seven iterations of the Catalyst, but the others were left out due to not having a programmer at the time,” he said.

The team recently hired a programming intern who is interested in working on more game mechanics, Walters added.

One of the features Walters would like to include in a sequel is co-op, he said, but in a way that encourages teamwork by giving each player a specific Catalyst power and making them work together to solve puzzles.

“It would be a lot more squad based,” he said. “Each player would have their own role.”

It’s unclear what’s on the horizon for Propelled Bird Software, but the team is keeping an open mind for future projects.

“We want to branch out into whatever we feel is fun,” Walters said. “We’ve discussed doing shooters, mobile games, strategy games. Anything that we feel would be fun for us and for other people.”