Arizona-based indie studio iqSoup has launched a Kickstarter campaign for western steampunk RPG Age of Grit. Andy Morrison, president of iqSoup, hopes to raise $12,000 by Sept. 25 to support the development of the PC strategy game – specifically, to hire artists, a composer and more programmers.

Age of Grit follows the adventures of the captain and crew of a steam-powered airship as it explores a western world in search of whatever jobs will pay the bills – transporting passengers or cargo, bounty hunting, working as guns-for-hire, engaging in piracy and more.

Morrison said he drew inspiration from Age of Grit from multiple sources, including Firefly, Final Fantasy, steampunk and the Wild West.

“There’s so much potential that has never been realized,” Morrison said. “What I like about ‘Firefly’ isn’t so much the setting… but the adventures they have.”

Unlike Firefly, Age of Grit will take place on one planet, on a single continent, because Morrison feels futuristic games set in outer space have been “kind of overdone.”

Instead, the game will focus on smaller scale adventures that highlight character interaction.

“When it’s on a more epic scale, a lot of that stuff can get pushed to the side,” Morrison said.

Combat in Age of Grit takes place between airships, is turn-based and revolves around a steam power mechanic. Airships generate a set amount of steam power each turn that can be used to power weapons, engines and other systems – but not all of them at once.

“In Final Fantasy, there’s no reason why you wouldn’t just use your most powerful attack,” Morrison said. “We really want a lot of variety in weapons so it’s not just obvious to pick the ‘strongest.'”

Age of Grit’s roleplaying elements includes a customization system allowing players to outfit their airship with various systems, including weapons and engines, each type with its own strengths and weaknesses.

The ship’s crew will also level up depending on use and have traits and abilities that can be prioritized based on player choice. The Kickstarter page has previewed the captain and pilot characters and will show off more crew members in the coming weeks.

“Especially in MMOs, the quests get so dumbed down that they become meaningless,” he said. “If you’re on a  big quest, why would you stop to help this person with a mundane task?”

Age of Grit has an advantage in that area because the player character is a mercenary trying to take whatever jobs they can to make money. But be careful who you work for – if you get a reputation as a pirate, it could cost you other jobs.

Morrison is aiming for between 15-25 hours of gameplay for Age of Grit on release. He said he “could inflate that to 100 or more hours … but it would be artificial.”

“It’s really about have quality quests without that filler material,” he said. “Writing isn’t the hard part – I could write quests all day. The hard part is making sure those quests work from the programming side.”

The game’s soundtrack – a work in progress – will help set the tone for various encounters and locations, Morrison said. Age of Grit’s music is another area inspired by Final Fantasy, specifically the seventh installment.

“It wasn’t video game music anymore,” he said. “It had ‘real,’ cinematic music.” 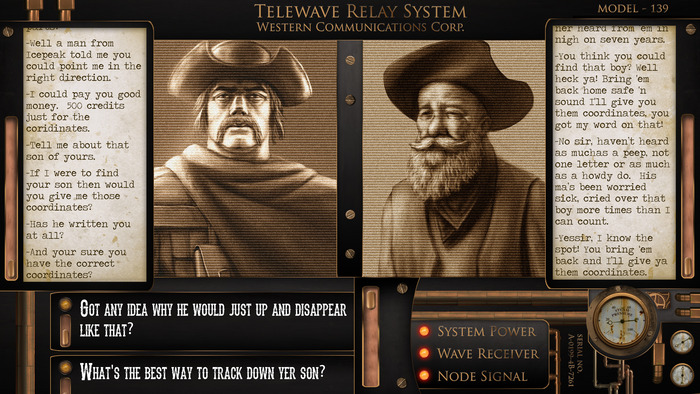 If Age of Grit’s Kickstarter is successful, Morrison will aim for a tentative release date of November 2015. Beyond the initial release, Morrison said he has considered developing more continents and new factions for the game.

Morrison said he has put some thought into stretch goals for the Kickstarter, but he doesn’t plan on revealing them until the campaign gets closer to its $12,000 goal.

“One thing I’d love for the game to have is really good cut scenes,” he said. “Ideally, we’d have animated cut scenes and voice overs, but that’s all out of the scope of that $12,000 goal.”

Morrison hopes Age of Grit will appeal to all fans of the roleplaying genre, but he’s specifically looking for support from the notoriously passionate fans of “Firefly” and the steampunk genre.

“There’s a ton of people who love steampunk and there’s a lot of people who specifically like steampunk video games – there just aren’t enough of them,” Morrison said. “But I can’t make this by myself – I need some help.”