A perfect sequel would do both, but developers often prioritize one over the other. Even a giant like Electronic Arts had to choose with The Sims 4, and the company chose the first route, even going so far as to leave out popular features from previous games.

Compared to its predecessor, The Sims 4 offers better customization, interaction and depth while sacrificing an open world and leaving some obvious content holes that, in typical Sims fashion, will inevitably be patched with expansion packs.

As a base game, The Sims 4 is the best installment in the series despite lacking some features as pools or toddlers. Here’s the thing: every games in the series has used expansions to complement the first release. Every Sims game is guilty of it, so it’s unfair to hold it against The Sims 4 more so than another installment. However, it’s a valid criticism of the entire series.

Where The Sims 4 shines is with its core features. Overall, they’re a strong improvement over The Sims 3. Most notable are improvements to the dialogue and emotion systems, which have undergone a complete overhaul to include various mood states for each Sim.

These “moodlets” grant bonuses or penalties to certain actions; an inspired Sim can churn out a novel in a few hours, while an uncomfortable Sim will lack creativity. A steamy shower will make a character flirtatious, while taking an “angry poop” will calm down an upset character.

Moodlets are paired with career aspirations and personality traits, which give bonuses to certain actions and make for an added strategic element to the game. You can essentially “power game” your Sims to succeed in specific aspects of life, if that kind of thing appeals to you.

The game’s careers are much deeper than in previous games and therefore offer much more opportunity for advancement than previous titles. Each of the eight careers branches into two separate paths; a writer can become a journalist or an author, while an astronaut can become a smuggler or a space ranger. 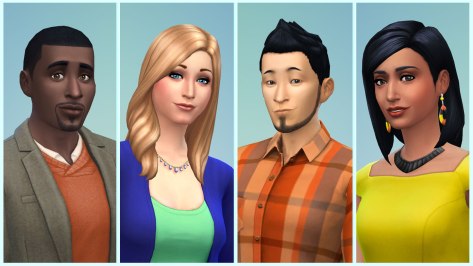 The game’s jobs aren’t any more engaging than in previous installments. You can’t control your Sim while they’re at work, and The Sims 4 replicates with crippling realism the all-consuming nature of a 9-5 work week.

Luckily, the game is much more permitting of alternative careers than the real world. It’s quite easy to make a living as a stay-at-home author, painter or programmer while freeing up more time for your Sim to pursue other interests.

Sim customization is vastly improved in The Sims 4; the game has one of the more impressive character creators in gaming. It’s easy to spend hours creating the perfect Sims replicas of your friends and family, and while still “Simlike,” they avoid the uncanny valley.

The character customization is matched in complexity by an improved build mode, complete with variable window and wall height and a room-based tool that allows players to drop and change whole rooms at once (including furnishings).

The lack of Create-a-Style, a popular feature from The Sims 3 which allowed for customized patterns, is mitigated by the huge number of color and pattern choices available for each type of furniture, flooring and wallpaper.

Neighborhoods also saw a big change in The Sims 4. Traveling from each lot to lot requires a loading screen, which wasn’t necessary with The Sims 3’s open world environment. It’s mildly annoying, but the open world brought its own problems – a huge load time on launch, poor optimization and a feeling of emptiness due to lack of other Sims wandering the world.

It’s a shame EA scrapped the open world, but as a result neighborhoods, parks and restaurants are alive with activity. There’s constant movement on the streets and a sidewalk conversation can easily turn into a neighborhood get-together.

It would be great if those neighborhood shindigs could turn into impromptu pool parties, but EA somehow neglected to include that series staple in The Sims 4. While some missing features in this installment can be ignored, this one is really unforgivable. It’s just not a Sims game without being able to send someone to a watery grave.

The lack of toddlers is less noticeable, but it’s a little jarring for your offspring to go from crying for a diaper change one second to playing the violin the next. Toddlers wouldn’t exactly add a whole new dimension to gameplay, but it’s another corner that really shouldn’t have been cut.

The game also lacks story progression for unplayed Sims. On default settings, AI controlled Sims will age normally but will never move, get jobs, have children or do anything else productive with their lives. There’s an option to disable aging for unplayed Sims, and I recommend it, because without it your neighborhood will quickly turn into a graveyard.

As a building block for future expansions, The Sims 4 is the best installment in the series. Improvements to core mechanics make everyday actions engaging, while character and house customization allow for more freedom than any previous title.

The open world and Create-a-Style from The Sims 3 aren’t missed too terribly, but the lack of pools, certain careers, toddlers and story progression is less forgivable. It’s unclear whether these features were cut due to mismanagement or with the intention of adding them later as DLC, but your opinion of that will hinge on your general feeling toward EA.

Similarly, The Sims 4 is a game that shouldn’t surprise anyone. It’s a solid foundation with plenty of room for expansion as long as you don’t mind buying an expansion or two. It’s a longstanding title, and EA knows its fan base. Ultimately, if you’re a fan of the series, you’ll probably enjoy The Sims 4. And that’s what makes it a good sequel.