Video games soundtracks are becoming “too Hollywood,” according to Arizona composer Christopher Norby. Some games avoid this trap, he said, but the true potential for games composing has still not been fully realized.

A native of Derry, Ireland, Norby now lives in Tempe and has worked on three mobile games: JellyFlug, Fionn Folk Tales and Grand Theft Seagull. All were developed by Ireland-based Troll inc.

He started playing the piano at age 6 and became interested in composing at age 11; films were his first inspiration, he said.

“The one that really stood out to me first was Aliens, the James Horner score,” he said.

While games composers owe a good deal to film soundtracks, Norby thinks games should avoid copying the style of film soundtracks too much, he said. Bioshock did a good job of keeping an orchestral and cinematic feel while staying original, he added.

“Some games have started to lose their originality,” he said. “But I think games are a brilliant media for writing music.”

END_OF_DOCUMENT_TOKEN_TO_BE_REPLACED

Local anime convention Saboten Con is taking place this weekend in Glendale. But you don’t have to be interested in anime to check out an expanded schedule of gaming events at this year’s convention.

In addition to its usual lineup of anime guests, panels, screenings and vendors, Saboten Con will feature multiple gaming tournaments, free play events and even a few video game guests.

Voice actor DC Douglas, voice of Albert Wesker in Resident Evil 5, and Kingdom of Hearts voice actor Derek Stephen will both stop by the con.

There will be two 3DS tournaments for Pokemon X/Y and Mario Kart 7 on Sunday, and AZHP Gaming is hosting tournaments for multiple games as well as casual play throughout the weekend. A complete schedule of gaming events can be found online. Passes are $20-$45. All events will take place at the Glendale Renaissance hotel.

Arizona-based indie studio iqSoup has launched a Kickstarter campaign for western steampunk RPG Age of Grit. Andy Morrison, president of iqSoup, hopes to raise $12,000 by Sept. 25 to support the development of the PC strategy game – specifically, to hire artists, a composer and more programmers.

Age of Grit follows the adventures of the captain and crew of a steam-powered airship as it explores a western world in search of whatever jobs will pay the bills – transporting passengers or cargo, bounty hunting, working as guns-for-hire, engaging in piracy and more.

Morrison said he drew inspiration from Age of Grit from multiple sources, including Firefly, Final Fantasy, steampunk and the Wild West.

“There’s so much potential that has never been realized,” Morrison said. “What I like about ‘Firefly’ isn’t so much the setting… but the adventures they have.”

Unlike Firefly, Age of Grit will take place on one planet, on a single continent, because Morrison feels futuristic games set in outer space have been “kind of overdone.”

Instead, the game will focus on smaller scale adventures that highlight character interaction.

“When it’s on a more epic scale, a lot of that stuff can get pushed to the side,” Morrison said.

Combat in Age of Grit takes place between airships, is turn-based and revolves around a steam power mechanic. Airships generate a set amount of steam power each turn that can be used to power weapons, engines and other systems – but not all of them at once.

END_OF_DOCUMENT_TOKEN_TO_BE_REPLACED 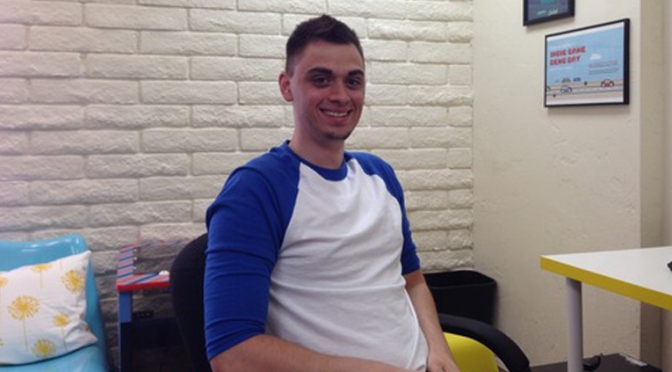 A team of Arizona game developers is hoping to bring esports back to its roots with an indie title aimed at local tournaments and modding communities.

The game is RMF, a movement-based 3D arena title for PC developed in the Unreal Engine and aiming for a fall release. Project manager Austin Shamp said it plays similar to a competitive game of tag.

“The players will be playing high-stakes tag, where one player will be chasing everybody else,” he said.

RMF‘s main game mode has no weapons, which Shamp said emphasizes precision in movement. While team game modes are planned, the primary game type is free-for-all.

“Focusing on movement makes it a lot easier to balance,” Shamp said.

Shamp is working on the game with Alex Reiss – Shamp designs the levels while Reiss handles the programming. The team is looking for at least one artist to handle textures, models and animations, as the game is still using default Unreal assets.

RMF is still in development, Shamp said, and the movement mechanics are taking the most time to perfect. Because there is such an emphasis on movement as a “strong base mechanic.”

END_OF_DOCUMENT_TOKEN_TO_BE_REPLACED

Four teams built games for the event based around a dinosaur theme and presented them July 20 at Arizona State University in Tempe.

“We wanted to bring people together and show them what we could do,” Game CoLab co-founder Ben Reichert said. “I wanted to do something that kind of symbolized Arizona because we do have some archaeological things here.”

Game CoLab has hosted game jams in the past with the most recent being the Phoenix Global Game Jam.

“With the global game jam we didn’t have any prizes and I’m really excited we had some prizes this time,” Reichert said.

A panel of judges chose the winners based on theme, programming quality, art style and gameplay features.

First place and the prize of a permanent Unity Pro license went to Dinosaur Story, a dinosaur exploration simulator that challenges the player with surviving in a 3-D world. The player dinosaur must prey on weaker dinosaurs while evading larger ones that can kill it, team member Tyler Knecht said.

“It’s a battle between surviving hunger and not being eaten,” Knecht said. “Eventually plants won’t suffice and you need to become a predator to survive.”

END_OF_DOCUMENT_TOKEN_TO_BE_REPLACED

Endgame Bar is looking for more beta testers to attend a daylong gaming party this month.

A $5 cover charge gets you access to all of the bar’s video games, a slice of pizza and entry to the Super Smash Bros. Melee tournaments at noon and 5 p.m. (a new addition to this month’s event)

Although the campaign failed, anyone who pledged at least $10 to Endgame’s Kickstarter will get into this and all future “beta test” events for free.

You can bring your own games, food and drinks but no alcohol. Parking is free on the weekends at the garage on Fifth Street and Forest (across from the light rail).

Last week, the Arizona game developers behind Aztez and Grave attended E3 2014 in Los Angeles to showcase their work. I caught up with them to get their thoughts on this year’s expo, what it was like to present their games there and what moments stood out to them.

Ben Ruiz makes up half of Team Colorblind, the minds behind fighting game/real-time strategy hybrid Aztez, coming this year to PC, Xbox One, PS4, Wii U and more.

Tristan Parrish Moore is the creative director for Grave, a survival horror game with randomized gameplay a surrealistic elements. The game recently completed a successful Kickstarter campaign and is shooting for a release date in early 2015.

Q: What did you think of this year’s E3 Expo as a whole?

Ben: It was kind of hard to get a holistic view of the event since we were hovering around the Aztez kiosks in the Microsoft booth. I just know that I saw a lot of great new games coming up, and it finally got me excited for this new generation of consoles. I have them, I like them, there’s just not much to do on them yet. So that was nice.

Tristan: This was my first time going to E3 – I’d never actually been in any capacity before. It was a bit of an interesting experience. it’s definitely different from many other conferences. We got a lot of support from Microsoft, which was really cool – we got presented in the Microsoft press briefing as one of the ID@Xbox games, so that was super great… It was really awesome to see that Microsoft is going a long way to represent the indie crowd.

END_OF_DOCUMENT_TOKEN_TO_BE_REPLACED

Arizona Gamer
Create a free website or blog at WordPress.com.